Lignocellulosic biomass can be converted into fuels and chemicals using thermochemical or biochemical process pathways. Biochemical processes involve biocatalysts. They can be enzymes that degrade biomass to a mixture of sugars, which can be fermented by microorganisms to produce a wide range of valuable compounds such as fuels, organic acids, alcohols, etc. When the aim is to produce liquid and gaseous biofuels, mainly two biochemical conversion processes are used: fermentation for ethanol production and anaerobic digestion for biogas production.

Several pretreatment methods, including biological, physical, and chemical pretreatments, have been studied. In a biomass-to-ethanol process at commercial scale, steam pretreatment has so far been the main choice. During steam pretreatment high-pressure steam is used to increase the temperature of the biomass to 160-240°C for a certain time, after which the pressure is released causing most of the hemicellulose and part of the lignin to solubilize. The cellulose remains undissolved but becomes more available for the enzymes.

During enzymatic hydrolysis, the cellulose fibers and hemicellulose which were not degraded in the pretreatment are decomposed into simple sugar molecules. Cellulases, a mixture of several types of enzymes acting in synergy, are used to attack the bonds between glucose molecules in different regions of the cellulose. As hemicellulose mainly consists of other types of sugars than glucose, and has a different structure compared to cellulose, its hydrolysis requires different enzymes (hemicellulases). In the end of the enzymatic hydrolysis a solution that is rich in various kinds of sugars is obtained and can be fermented.

The sugars produced can be fermented to ethanol by yeast or bacteria. Due to it generally being recognized as safe, robust, and presenting high ethanol tolerance, ordinary baker’s yeast (Saccharomyces cerevisiae) is the most preferred microorganism. But ordinary baker’s yeast can only ferment sugars that contain six carbon atoms, such as glucose. To convert sugars from hemicellulose containing five carbons (e.g. xylose and arabinose), the yeast needs to be genetically modified or replaced with other microorganisms, e.g. bacteria. Enzymatic hydrolysis and fermentation can be carried out in two main configurations: consecutively, known as separate hydrolysis and fermentation, or at the same time in one vessel, known as simultaneous saccharification and fermentation (see Figure 1).

To obtain a high-purity product that can be used for fuel production, ethanol needs to be recovered from the fermentation by distillation and dehydration. Residues from distillation are separated into solids and liquids. The solid residue, which is rich in lignin, can either be burnt to produce steam, heat, and electricity, or converted to various coproducts. The liquid residue is sent to an anaerobic digestion plant to produce biogas. Ethanol obtained by this process is blended with gasoline at different ratios (E5-E85) or can even be used as a pure ethanol fuel (E100).

Anaerobic digestion (AD) is the microbial decomposition of biomass into biogas without the presence of oxygen. Biogas is mainly composed of 55-65% methane and 35-45% carbon dioxide, but it can also contain small amounts of e.g. nitrogen, hydrogen, oxygen, hydrogen sulfide, and ammonia. The composition of the resulting biogas depends on the type of biomass used.

It is possible to break down biomass by means of AD without pretreatment. However, higher biogas yields can be achieved in shorter time if pretreatment is applied. The four main steps of AD are hydrolysis, acidogenesis, acetogenesis, and methanogenesis (Figure 2). In each step, different groups of microorganisms are used.

In the hydrolysis step, large macromolecules such as carbohydrates, lipids and proteins are broken down by enzymes to smaller compounds, such as simple sugars, amino acids, fatty acids. These are further degraded in the acidogenesis to organic acids and alcohols, which are in turn converted to acetate, as well as to carbon dioxide and hydrogen in the acetogenesis. In the final step, methanogenesis, biogas, i.e. a mixture of methane and carbon dioxide, is produced by two different types of bacteria. One converts acetate and the other type utilizes carbon dioxide and hydrogen to produce biogas.

Biogas obtained from AD can be burnt and the energy released can be used for heating purposes. Alternatively, after removal of carbon dioxide, biogas can be compressed the same way as natural gas and used as a vehicle fuel. 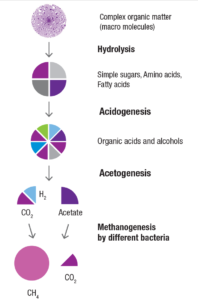 Faktabladet är i dagsläget enbart tillgängligt på engelska. Methanol is the simplest form of alcohol and it is produced via…