Electric Road Systems (ERS) allow vehicles to charge whilst driving, with electricity provided from the road infrastructure either in the roadside area or within the road construction. There are three major concepts of ERS: conductive overhead lines/catenary technology, conductive rails, and wireless induction technologies. Currently, several ERS technologies are in different stages of demonstration, in Sweden as well as abroad.

Applications of ERS technologies are tested at several locations around the world, from test sites in Italy, France, Israel and Japan, through inductive charging of city buses in South Korea, to fully operating demonstrations on regional roads and highways in Sweden and Germany. To this date, no long-term tests have been performed but the ERS concept development is progressing, with some examples given for the three major concepts below. 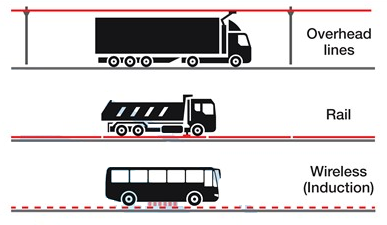 This concept builds on the same idea as the railway, with roadside support masts to hold contact cables about 5 meters above the road. Trucks or buses with pantographs mounted on the roof will be able to connect to the overhead lines and charge conductively while driving. The difference from trolley buses is that vehicles can connect to the lines while in motion and likewise disconnect if for instance having to change lanes. Passenger vehicles will not be able to use such a system. Conductive overhead lines have no direct impact on the road construction, but the need for extra infrastructure, such as the support masts, visually impacts the landscape.

The first electric road opened on a road with regular traffic was built for the catenary ERS concept. It was successfully implemented during 2016-2020 along 2 km of the E16 road close to Sandviken, Sweden, and demonstrated the use of power lines above the road to electrify heavy-duty vehicles. In Germany, conductive overhead lines placed above a 10 km stretch of the autobahn A5 between Darmstadt and Frankfurt were implemented in 2019 as part of a three-stage project called ELISA. Currently, the project is in phase two, testing the eHighway system regarding vehicles and infrastructure.

Conductive rails can be installed in the road surface, bolted upon the surface, or installed at the side of the road. An electric current collector or pick-up mounted under the vehicle will either attach itself to the rail construction or slide along the contact material, conductively transferring energy to the vehicle. This technology can be used for heavy-duty trucks, distribution trucks as well as passenger vehicles. Compared to the catenary concept, conductive rails will not visually impact the landscape.

Two demonstration projects on regular roads in Sweden are using the conductive rail concepts; eRoadArlanda and EVolutionRoad. In the first, 2 km of conductive rail were installed in the road surface between a logistics terminal and the Arlanda airport freight terminal. In the second, an electric road with a ground-level feeding system is being tested for a city bus in Lund. The concept can be used both for trucks, buses and passenger vehicles. There re also other technology concepts being tested in Sweden and abroad, e.g. by Alstom and Honda.

For this technology concept, copper coils are installed underneath a surface layer of asphalt. An electric current is magnetically induced between the copper coils in the road and a receiver in the vehicle. Wireless induction is totally embedded within the road construction, with the visible impact being electrical distribution boxes/boards that are regularly placed along the roadside. Because of the embedded copper coils, regular road maintenance and operations such as snow ploughing, or preventive anti-icing will not be affected by or harm the technology itself.

Wireless induction is currently tested in Visby, Sweden, where the installation of a 1.6 km long electric road was finished in December of 2020 for the purposes of a demonstration project called SmartRoad Gotland. This electric road can be used both by trucks and cars.

The impact on the road infrastructure and roadside areas from the implementation of ERS varies between concepts. The catenary concept is not expected to affect the road surface, whereas the rail and inductive technologies will affect the road structure during the installation procedure and the roads service life, for example when the road needs resurfacing. However, the catenary concept may influence maintenance operations by complicating verge maintenance and snow ploughing activities. The embedded inductive technology will probably not affect winter operations. It is crucial to recognize that implementation of ERS may affect not only road users, but also road maintenance operators, emergency personnel, energy grid suppliers, road authorities and vehicle manufacturers.

ERS technology is not intended to be installed on all roads or along the whole road stretch, but rather work as a range extender between charging points. Vehicles using the ERS therefore need to be able to drive outside the electrified road network. This can be achieved either by using a rechargeable battery or a hybrid solution where the vehicle uses some other kind of fuel or energy carrier. The combination of battery and vehicle size along with availability of additional charging possibilities determines the driving range outside the ERS.

Focus for ERS has so far been on the heavy goods transport sector, but in-ground installed ERS could be an alternative suitable for passenger cars as well. It could also potentially offer stationary charging of distribution trucks while loading or unloading goods at depot.

When it comes to costs of the ERS, the installation costs vary between concepts and assessments remain uncertain until a large-scale implementation has been performed. Estimates range between 1.7 and 3.1 Million EUR/km, including costs for installation, infrastructure, connection with the electricity grid, etc. The high costs for the system could become a potential barrier towards a large-scale implementation of ERS.

Another difficulty associated with ERS technologies concerns standardization. There are many interfaces of the system where standards are needed but not always applied. The interface between vehicles and infrastructure is one and the payment system another. Some standards have already been agreed upon at a European level while decisions on others remain.

Environmental Impact of Electric Road Systems. A Compilation of the literature review of Work Package 2 in the FOI-platform for Electrified Roads. Report 1053A from the Swedish National Road and Transport Research Institute (VTI), 2020.

Faktabladet är i dagsläget enbart tillgängligt på engelska. Main forestry products are timber and pulpwood, but residues from forestry, such…