The EU Renewable Energy Directive (RED II) establishes that a minimum of 14% biofuels or other renewable fuels for transport shall be used in every Member State by 2030. The Fuel Quality Directive (FQD) is aimed towards fuel suppliers, obliging them to reduce greenhouse gas (GHG) emissions with 6% by 2020. Only biofuels meeting the sustainability criteria regarding net GHG savings, biodiversity and land use can be counted towards the targets. In RED II, the Indirect Land Use Change (ILUC) is considered, which amongst other strives to reduce indirect GHG emissions from biofuel production.

The Renewable Energy Directive, RED I, (Directive 2009/28/EC), was adopted by the EU in 2009. It mandated that all Member States (MS) shall have 10% (on energy basis) biofuels in the transport sector by 2020. A revised version, RED II, (Directive 2018/2001/EU) entered into force in December 2018 moving the legal framework from 2020 to 2030. In RED II, a union target stating that the total share of energy from renewable energy sources shall be 32% of the final energy use in the EU by 2030. A national target is defined in RED II where MS shall establish an obligation for fuel suppliers to ensure that the share of renewable energy in the transport sector is at least 14% of the total energy used in the EU by 2030. This 14% target may become stricter after 2023 to align with the 55% emission reduction target by 2030 and the 2050 target of climate neutrality.

RED II describes several sustainability and GHG emission criteria that MS need to meet for a biofuel to be considered contributing to the RED II targets. Biofuels must also meet the sustainability criteria to receive financial support, such as tax exemptions.

The Fuel Quality Directive, FQD, (Directive 2009/30/EC) was adopted as an amendment to Fuel Quality Directive 98/70/EC in 2009. It sets requirements on fuel specifications, but also obliges fuel suppliers to reduce GHG emissions. By 2020 every sold unit of energy must reduce life cycle GHG emissions by at least 6%, compared to the EU-average fossil fuel in 2010. FQD gives the fuel suppliers a number of options to obtain this 6% reduction, e.g. via reductions in oil refineries, or use of biofuels and alternative fuels. The biofuels must meet the same sustainability criteria as in RED II. In 2021, discussions are ongoing regarding an increased reduction value and to move the sustainability criteria from FQD to RED II.

In 2015, amendments to RED I and FQD were introduced with the Directive on Indirect Land Use Change, ILUC, (Directive (EU) 2015/1513). It introduced ILUC values for biofuels, and stricter sustainability criteria compared to RED and FQD. The ILUC rules are now included in RED II along with the criteria for determining high ILUC-risk feedstocks for biofuels.

Integration of renewable energy in the transport sector

As stated above, each MS shall establish an obligation for the fuel suppliers to ensure that the final energy use within the transport sector is at least 14% in 2030. To reduce the incentives to support less sustainable biofuels, RED II introduces calculation rules for the 14% target.

Biofuels based on food or feed crops can only represent 7% of the 14% target, and there is a restriction for the amount that can be high-ILUC risk fuels (i.e. palm oil, as defined in the delegated act 2019/2055). The amount of high-ILUC risk fuels is not allowed to increase and should decrease to 0% in 2030.

RED II promotes so-called advanced biofuels, e.g. biofuels based on algae, waste, manure, sewage sludge, ligno-cellulosic and non-food cellulosic material (defined in Annex IX part A). MS should introduce a binding sub-target for advanced biofuels of at least 0.2% in 2022, 1% in 2025 and 3.5% in 2030. The rest of the fuels that can be accounted to the 14% target are fuels produced from used cooking oil and animal fats (category 1 and 2, defined in Annex IX part B). Renewable electricity and recycled carbon fuels can also be included in this group.

Based on sustainability criteria (see next section) for different biofuels, RED II allows the advanced biofuels to be counted twice towards the 14% target. For fuels produced from used cooking oil or animal fats, 1.7% can be counted twice towards the 14% target or the 3.5% target for advanced biofuels. The reason for allowing only 1.7% to be double-counted is to align with the limited availability of the feedstocks. Moreover, renewable electricity for road transport shall be counted four times and in rail-bound transport, it can be counted 1.5 times towards the target. 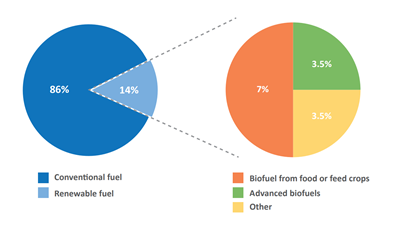 Charts showing the target value for the transport sector (14%) of which the maximum limit of biofuel from food or feed crops is 7% and the minimum limit for advanced biofuels is 3.5%.

RED I required a 35% GHG emission saving from the use of biofuels. From 1 January 2018, GHG emission savings from the use of biofuels produced in old production units (starting prior to 5 October 2015) must be at least 50%, according to the ILUC Directive. For units where biofuel production started after 5 October 2015, the threshold is 60%. For units where biofuel production started from 1 January 2021, the threshold is 65%. The biofuel values are compared to a baseline of 94.1g CO2 eq/MJ for fossil fuels.

The economic operators, in most MS identified as the companies that pay fuel tax, are responsible for showing that the sustainability criteria have been fulfilled. They are obliged to have a control system that keeps track of the different batches of biofuels, where the raw material is taken from, and the sustainability properties of each batch. Independent auditors inspect and approve the quality of the control systems.

Implementation of RED II in Sweden

In Sweden, the integration of renewable fuels in the transport sector is mandated by the reduction mandate (Reduktionsplikten) that entered into force on 1 July 2018. Updates, including, e.g, rules for which fuels that can be used to meet the reduction mandate and regulation of high ILUC biofuels are suggested to enter into force on 1 August 2021.

RED II includes a list of default GHG values for segments of the biofuel production chain: cultivation, process, transport and distribution. The economic operators can choose to use the default values (if the biofuel chain corresponds to those listed in the directive), their own calculated actual values, or a combination of default and actual values. Calculation of actual values is made according to life cycle assessment methodology and rules described in the Directives annexes.

If there are by-products from the production process of the fuel, these can share the GHG emissions in relation to their energy content. There is also several negative emissions that can reduce the total GHG emission value. These are, e.g., improved agricultural management methods allowing more carbon to be bound in soil, excess electricity produced in the biofuel plant, CO2 that is separated and geologically stored, and CO2 that is separated and replaced. There is also a GHG bonus if raw material is cultivated on severely degraded land. One example of a feedstock that gives negative CO2 emissions is manure.

The figures below show some examples of default values for ethanol, biodiesel and HVO from different feedstocks and for biomethane, respectively. For biomethane, negative emissions for biomethane produced from wet manure, received from manure credits, is illustrated.

Example of default values for a number of ethanol, biodiesel and HVO production pathways, with the reduction targets marked (reduction compared to fossil fuel emissions of 94,1g CO2 eq/MJ).

Example of default values for a number of biomethane production pathways, with the reduction targets marked (reduction compared to fossil fuel emissions of 94,1g CO2 eq/MJ). For biomethane produced from wet manure, the total g CO2 eq./MJ is marked with the dashed line taking the negative emissions from manure credits into account.

[1] Bioliquids are liquids produced from biomass that are used for purposes other than fuel, e.g. electricity generation or heating.

Faktabladet är i dagsläget enbart tillgängligt på engelska. Biomethane is a gaseous fuel which consists of mainly methane. Biomethane is…